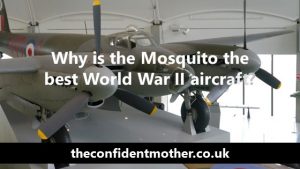 The Spitfire is probably the best known British fighter plane (the Hurricane a close second), while most people recognise the Lancaster as one of Britain’s best bombers. However many argue that the BEST British World War II aircraft is the Mosquito. “Hang on” you’re thinking. “Why is the author of The Confident Mother randomly talking […]